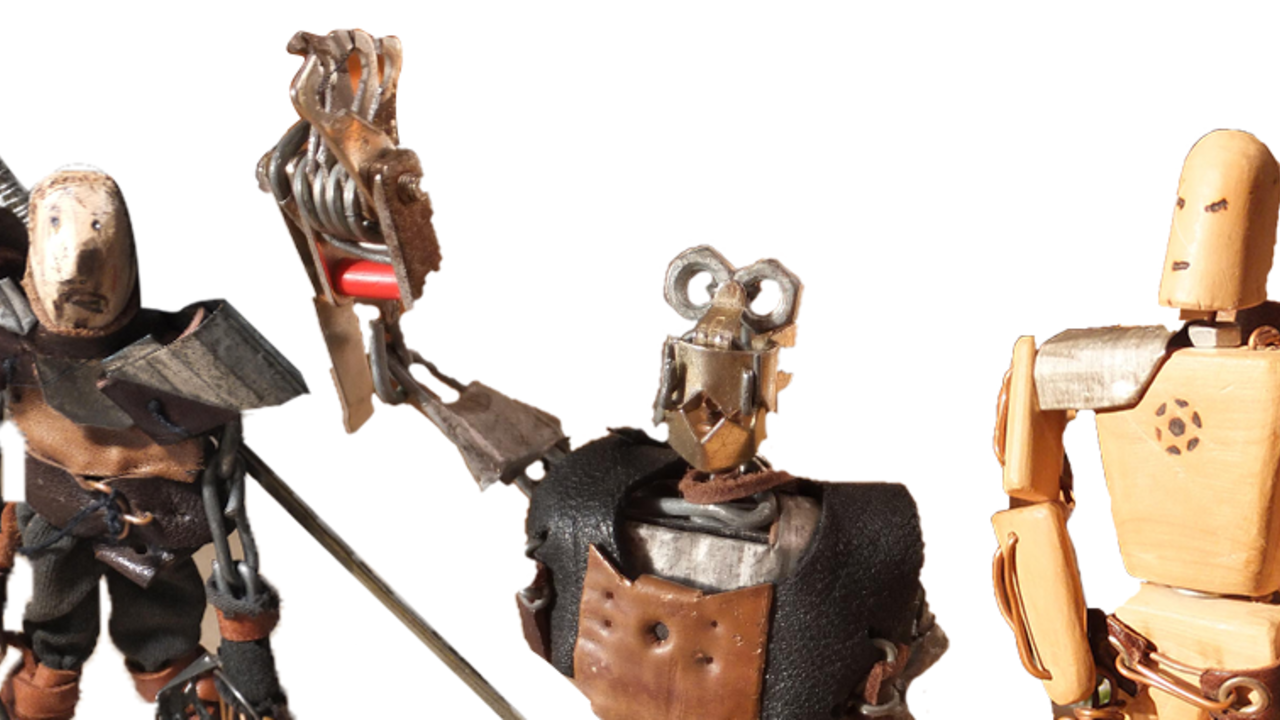 Darren de Lima is a local product designer and electronics student at Bath Spa university. Since he was 14 he has been making action figures out of recycled materials. His figures have inspired him to start writing a novel based on his characters that he’s developed.

On the run-up to one of our action figure inspired holiday sessions back when we had the Creative Learning Centre, we asked him a few questions about his creations. 1) What inspired you to start making your own action figures when you were young?

Interesting things I’ve seen. My starting point, I guess, was Lego’s 2001-2010 Bionicle – they were buildable robot action figures and I loved them. Then I wanted to make my own toys, to play cool things with and, more recently, as characters in their overarching story. I fell in love with making my own, and I still do enjoy it.

2) You make your figures out of recycled materials is there a reason for this?

Recycled materials are easy to come by. Tin from tin cans, scraps of left-over leather, wire from fencing, bits of old radios and construction materials… I’ve actually been privileged to have lived in construction zones most of my life, and to have had ready access to many raw materials for my projects.

3) How long do you work on one of your characters and do you sketch them first or just start working with the materials you have around you?

Most of my action figures were made with very little planning or sketching. I got an idea, and the materials took shape accordingly with a bit of coaxing. For my latest ones, though, I tend to either have art that I have drawn of them sitting around, and I think “Hey, I want to make a toy of that one!”, or I draw a concept sketch. Then, I grab my materials and start working on them; for the latest three action figures (at the moment, incomplete here at home), I started with the heads. One of them’s been held up while I get my hands on some special materials.

As for how long it takes to make them, it varies. A simple(ish) robot took about 20 hours, I reckon, working maybe about 4 hours a day, one day a week for a few weeks. A detailed head I carved recently took just under two hours. The Fontana D,C,-9000 (the space rocket-bike), probably my largest project, I made over the summer holidays a few years back.

4) Which of your figures was the most rewarding to make and why?

I am proud of all of my figures. There are a few highlights, such as…

Rudior the Atakari warrior
he was the first fully jointed wire-skeleton action figure I made, he kick-started the next part of my action figures’ story, and inspired both of my brothers – they still base their wire skeletons off his, to this day!

Bob the Robot
The most realistic robot I have made, and I am quite proud of him.

Aragh Tuareg
The first of my action figures and made almost entirely of wood. But the most rewarding has been...

Ammasar Inaya
The Iron Elf wearing a robotic armour suit, he has one of the most distinctive looks out of all my action figures, and is one of my personal favourites; makes for great playability, too. He inspired me to think up a major second section of the action figures’ story. I got galvanised into making him a rocket-bike, and, in combination, Ammasar and his bike are my second magnum opus. He also makes for good showing-off 😉

5) You are writing a novel around your action figures. Can you give us a little taste of the narrative?
(Please note, most of the material is in the rough planning stages or in my head at the moment)
That would be my pleasure. Take a seat and gather around, for now:
A Tale is told, of Machines and Men…
RobotOne: First Light (Part 1)
A world is but a few steps too far down the galactic arm. Once lush and green, thousands of years of mass production and nuclear war have left the surface barren but for ruins of Ozymandias, the last great king of men. Humanity now lives below the surface, subsiding on geothermal energy from the planet’s core. And it is election day in the city of Babylonia Magna.
Maverick engineer Vladovich Ganning is given a message: a warning – mankind’s cup of iniquity is full, they have elected destruction, and the world will end. The slate will be wiped clean, and Ganning will lead the chosen survivors in better ways. He doesn’t pay much attention, and ends up escaping the planet with his robot butler and a lot of bad people he should have left behind.
After serious disagreements with his former best friend, he ends up marooned in a chunk of broken spacecraft near a black hole. Here the story splits, following both the villains on their 25 year journey across the centre of the galaxy, to surviving human settlements, and Ganning, in the 5 years that pass for him due to black hole time dilation.
Diary of The People:
Following Ganning’s Gap theory about the structure of the galaxy, they travel towards a nebula that, old records say, supported humans a long time ago. They  are given a message: they have escaped the destruction of their world. They must learn to live together, to solve conflict peacefully, to treat their neighbours as they would like to be treated. Or they will be doomed to repeat the mistakes of their forefathers. Either way, they’ve got time: they’ll be stewing in their own juice on a cramped spacecraft for years.
Ganning’s journal:
His journal entries tell of his time, marooned in orbit around the planet Carrathyn Zuor. His robot butler is dead, saving him when the spaceship broke. He tries signalling for help, from anyone out there. No luck. He develops and finishes the Hyperenergy Core, a device that uses chirp signalling beyond the electromagnetic spectrum to interact with the Higgs field. He uses it to power the ruined spacecraft while he starts work on a second robot to outlive him, as he can’t see any way of long-term survival. He programmes it with the story of everything that happened, and all of his homeworld’s history.

He tries signalling with Hyperenergy technology, but ends up beaming all his data out into the Higgs field.
RobotOne: Crisis strikes.
The robot empire is destroyed in the Great Cataclysm, as the planet tears itself apart in the presence of the black hole. I am Aragh Tuareg, and I will rebuild our empire. The robot emerges on the dusty planet and seeks his fortune amidst the ruins. He meets fellow robots, Omega and Epsilon. Together, they rebuild civilisation, the Robot Empire that the Tuareg remembers. He discovers a golden cog, part of a suit of armour worn by one of the Ancient Heroes.
The survivors of Babylon reach their destination, the Nifelheim nebula, and there are other people there. But Babylon’s wicked ways and destructive migration leads immediately to disagreements with the locals, and they relocate to the world they name Centrus Grand. They rebuild civilisation, the Human Empire that the legends speak of.
The Tuareg discovers the power of the hyperenergy and uses it to travel to Nifelheim and Centrus Grand, where he is copied and starts the technological revolution. Returning, he sets off immediately for adventures in the Muspelheim nebula (near the ruins of Babylonia Magna), aboard a passing space pirate ship.
The Despot:
The Aragh Tuareg is involved in a civil war among robots that have been built back on Carrathyn Zuor, where he strives to protect a liquid crystal stasis capsule, containing friends of Ganning’s. Tuareg still believes in some past robot empire; Ganning has yet to inform him that the spacecraft orbit decayed while he was being programmed; thus, his confused memories are based off the Golden Age, before Ozymandias, from the history of Babylonia Magna. Tuareg falls into liquid crystal stasis, only to emerge a year or so later, facing a false robot kingdom ruled by another robot, a despot, that has arisen. And his old friend Omega has disappeared. Using the power of the golden cog and the Ancient Hero armour, he saves Carrathyn Zuor.
The Rise of the Swords:
The Ancient Heroes are explained – legends say that during the Golden Age before Ozymandias, they wielded the Hyperenergy to advance civilisation and to hold off the Great Hunter dragons. Their Hyperenergy Cores were built into their seven swords, or into their armour. Gradually, their equipment developed AI personalities akin to their own to supplement their own. When the Golden Age passed away, their equipment remained. One of the swords, the Fragmentator, was corrupted and led the entire Gargantuan alien race to its doom. All? No, one survives, living among the pirate towns of Muspelheim, carrying one of the swords of the Ancient Heroes. This Gargantuan teams up with Rudior El Dannedre, one of the Atakari, an elite army from Babylon that survived its destruction because it was stationed on Muspelheim. Their adventures introduce the Atakari and the invincible Insekta.
The Aragh Tuareg discovers a Dark Elf helmet that corrupts him, and leads him to create an invincible robot army, the Insekta. In a moment of lucidity, he creates a hero robot to defeat himself, Drusus. Drusus, and a lone good Insekta, T1, follow the artificial moon, wherein all the Insekta are made, as it drifts to the ruins of Babylonia Magna. Tuareg is rebuilding them and wreaking havoc throughout the local star systems with his army. He is eventually defeated by Ganning and a force of Atakari and told the truth about Babylonia.
Tuareg accepts that Babylon shouldn’t be rebuilt, and they set the Insekta moon adrift, no more to trouble the universe. Drusus, Rudoir, T1 and the last Gargantuan hitch a ride on it, to their next adventure. 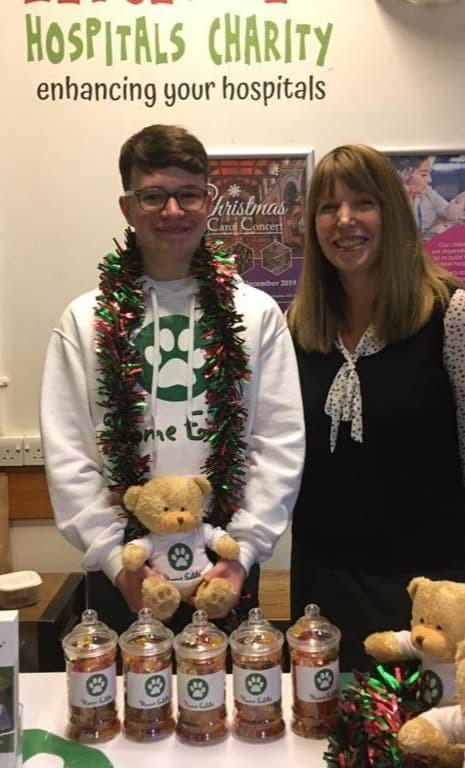 Join our mailing list to receive the latest news and updates from our team.
Don't worry, your information will not be shared.